More than 60 years in the Heart of Hollywood

The principal company of Latin America in the purchase and distribution of movies.

Telefilms, business agent of Whiland International, was founded in 1961. Through its alliance with leading distributors in the region, it constitutes the largest independent distributor in Latin America. Telefilms is led by a young and dynamic team, with the most extensive know how in the region and of all its players.

During 60 years, Telefilms has managed the TV rights for Latin America of great movies and series, such as THE KING´S SPEECH, MILLION DOLLAR BABY, DANCES WITH WOLVES, THE LAST EMPEROR, THE SILENCE OF THE LAMBS, TERMINATOR 2, GET SMART and SPEED RACER. Telefilms has also represented and distributed first class films, such as ORION and CAROLCO.

Currently its catalog contains 1,000 films available in Latin America.
In 2015, the year in which the company celebrates 55 years of experience within the television market, Telefilms has become the leading company in the Latin American region for films purchase and distribution.

Telefilms is actively involved in the major television markets worldwide, with stands at Miptv, Mipcom, Natpe and Los Angeles Screenings, and it attends the American Film Market and Cannes, Berlin and Toronto Film Festivals.

Telefilms is a sister company of Diamond Films, which was founded in 2010 and is currently the leading independent movies’ distributor in Argentina.

Diamond Films operates through its subsidiaries in Argentina, Brazil, Chile, Bolivia, Peru, Mexico and Colombia. As part of this growth, Diamond Films landed in 2016 in the European market through its new subsidiary in Spain.

Telefilms is thus the only independent distributor in Latin America with access to the heart of Hollywood, currently offering over 35 high-budget films a year (many of them distributed by major U.S. Studios). 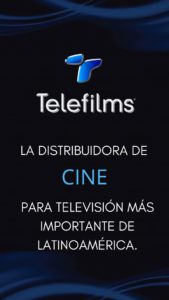